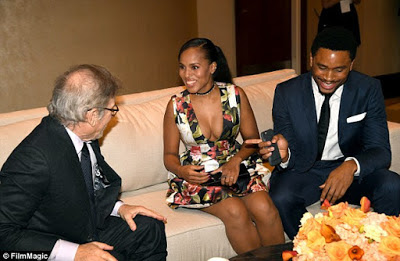 Kerry Washington and her husband Nnamdi Asomugha left their two babies at home to attend the Ambassadors for Humanity Gala Benefiting USC Shoah Foundation in Hollywood, Los Angeles on Thursday.


The actress gave birth to their second child, a son, Caleb Kelechi Asomugha. This marks the Scandal star's first public appearance since giving birth to their son in October.

The couple, who rarely make public appearances together, looked amazing at the event. The couple mingled with renowned filmmakers Steven Spielberg and honoree George Lucas at the event.

Prior to giving birth, the 39-year-old actress said at this year's Emmy Awards that she was nervous about having two children in the house.

She said:
"I'm an only child so every time the family grows it uh... it brings up a little bit of anxiety," she explained. "But it’s fantastic. I'm really happy."

Kerry Washington and Asomugha welcomed their first child, a daughter, Isabelle, in April 2014.
at 9:23 AM