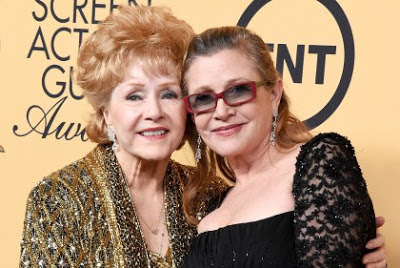 Actress Carrie Fisher, suffered a heart attack while returning from a book signing event in London on Sunday, she never recovered and died on Tuesday.


The following day, Wednesday, her 84 year old mother, Debbie Reynolds, who rose to stardom in "Singin' in the Rain" suffered a stroke and died from it.

According to TMZ, her son Todd said Debbie was rushed to a hospital shortly after 1 PM when someone at the Beverly Hills home of her son, Todd, called 911 to report a possible stroke.

Debbie and Todd were making funeral arrangements for Carrie, who had died on Tuesday of cardiac arrest at age 60.