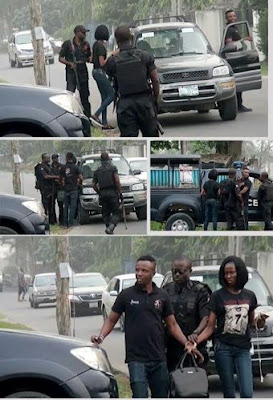 A Nigerian man based in Port Harcourt, Brown Affah,  proposed to his girlfriend Yemi with the help of policemen while he pretended to be a thief. 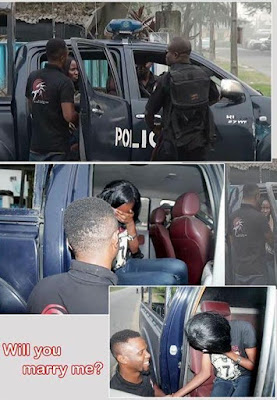 Below is what Brown wrote:
'Good morning Facebookers
This pictures have so many stories behind it, firstly I was sure of the color of clothes she wore to work, black top and blue jeans so i called some of my single friends who are still around after Christmas  Kingsley Asika, Grandeur Chef Wisdom Noble, Woka Richy and
my blood Brown Victor to wear same clothes including me and partake in the action movie episode 1& 2 while I'll be acting episode 1 with her, they'll join in episode 2.
Cast:
Police man 1
Police man 2
Police man 3
Brown Affah - the proposer
Effiwatt Yemi - the proposee

Extras:
People passing by
People who came to ask what happened
People stopped while driving to see if they really caught a criminal.
Camera man 1
Camera man 2.

Action;
I went to her office and picked her up by 5:43pm, drove her to GRA phase 2 that I wanna buy her shawama which I know she'll fall for. Meanwhile I've given signal to my good police officers that we are on our way without her knowledge. On approaching they flagged us to stop, I cleared they said finally we have caught you, the notorious criminal Brown,  i said sorry officer that must be a mistake somewhere. Shut up they shouted, are u not brown? Yes I am I answered,  u were involved in a robbery and now we have caught u.guns cocked. My girl was scared but calm,  all she said was baby its Ok, lets follow them but I know you are not a criminal.
Cuff them, and they did. Pushed us towards their vans with my girl panting but calm....then I told them I wanna say something,  shut up they shouted but the leader asked ; what do u wanna say? So i looked into my lady's eyes and told her babe; u don't actually know me well.so u know them? She asked,  yes I know them i replied.And u know I've never said the word; I love you to you because I wanted to be sure I did and tell u on this day i said.

Yes I do love you,  and I wanna spend the rest of my life with you I continued , with one knee on the floor....whaaaat she screemed,  covered her face and said a big YES with the police men clapping, and passers by clapping and watching....we hugged and the cuffs was removed.And finally that's a wrap.
End of episode 1, episode 2 coming up soon.
Credits to the camera men
The Nigeria police force,
They are your friends

Not all police are bad, this crew was super and nice'.