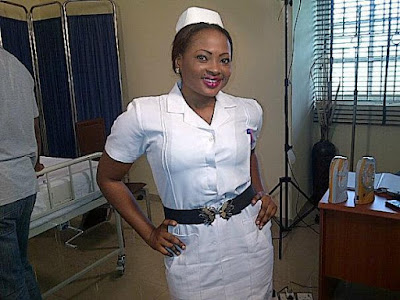 Nkechi Emmanuel who acts as Nurse Titi in the popular sitcom "Clinic Mattera" has opened up about her spouse in an interview.

And as she has become so known in the popular sitcom, Nurse Titi now has so many fans, one of who she is currently dating.

She said, “Love doesn’t have a boundary. If I fall in love with a fan, of course nothing stops me from marrying him.  The person who I am seeing right now is a fan. He is someone who loves what I do 100 per cent and supports me.”

The actress added that although she is lucky to date someone who understands the nature of her job, she does not know what she would do if her future husband asks her to quit acting.

“So far, my loved ones and family are in support of what I do. I do not even think the man that would get married to me can ask me to quit acting but if it happens, I cannot really say this is what I would do.  But it would not happen,” she said.

The actress told Saturday Beats that she could not get married to a poor man as she talked about the qualities she looks out for in a man.

“I cannot marry a poor man but if he has prospect of being rich, then he is a good one. If he is poor without such prospects, then I do not see that working. When it comes to my dream man, he must be God fearing, intelligent, handsome and he must be focused,” she said.

Speaking on her career, Emmanuel said she is grateful to God for where she is but she still has some burning desires.

“So far, I think I have done my best in terms of my career. But I like to change the face of Nollywood and I like to bring Hollywood into Nollywood. I want to build something like a Disney World for Nollywood in Nigeria. In this place, you can shoot and edit your videos as you have fun.”
at 12:49 PM