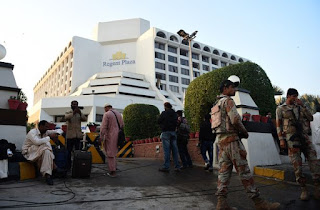 A Pakistan cricketer has broken his ankle escaping from a massive fire that has hit a Karachi hotel, leaving at least 11 people dead.


Yasim Murtaza reportedly broke his heel bone jumping from the second floor in a bid to save his life, while Sohaib Maqsood is reported to have saved his family from the flames.

More than 70 people also suffered injuries at the Regent Plaza hotel, where United Bank Limited were staying while taking part in the Quaid-e-Azam trophy.

UBL manager Nadeem Khan confirmed Murtaza and Ali's injuries and that the rest of the team are in a stable condition.

"Yasim, however, jumped from second to first floor and broke his heel bone, while Karamat Ali suffered a hand injury," Khan told ESPN Cricinfo. "The rest of the boys are fine and didn't suffer any life-threatening injury at all, but they were given oxygen as they were suffocating with the smoke."
at 1:04 PM