Renowned tv host Emmanuel Ugolee in need of $100,000 to save his life 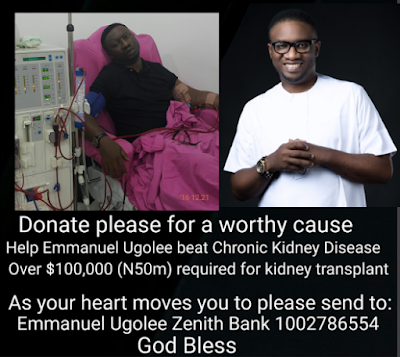 No one who has followed the evolution of Nigerian entertainment would be a stranger to his name as we all recall his enormous contribution to its growth.


Many of us would also recall that in 2012 he was diagnosed with stage 5 of the chronic kidney disease which placed him on dialysis as the source of sustaining his life until he could get a kidney transplant which he got in India on February 22, 2012 paying for it by his own efforts.

Like many celebrities who had gone for transplant in India, it failed just six months after transplant.

Infact his creatinine level for measuring nomalcy never hit the required reading from the theatre until it packed up again It's been about 5years since then and Emma Ugolee is still living with the nightmare of the disease and a 3 time weekly treatment called dialysis where he gets his blood purified for four hours at an average of N35,000 per session.

He is currently dealing with stenosis of a major vein which is blotting his upper body even after a recent 8 hour sugery in the Kano state teaching hospital. His physicians admit that his body is getting tired and would best need the transplant soon. He is looking increasing weak and sick and it is dangerous to let this go on.

We would hate to loose him I am kindly calling on every well meaning individual who is reading this to please do what you can to help Emmanuel Ugolee go for his surgery in the United States early next year.

He is in current talks with the Kidney centre of the University of Maryland known for dealing with complex kidney disease cases and it is so far projected that a basic $10,000 would be required for all pre surgery evaluation and $90,000 for the actual live donor transplant. Emmanuel is a very intelligent, resourceful, warm, hard working and inspiring man that deserves your mercy.