Ubi Franklin opens up about his wife, son and business 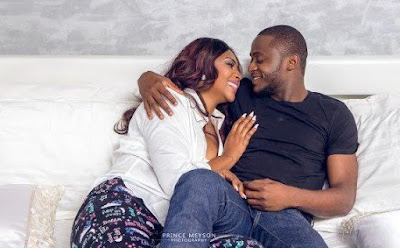 Triple MG Boss, Ubi Franklin, in an interview revealed how getting married to his beautiful wife, Lilian Esoro, and the birth of their son, are the greatest things to happen to him.


Read the interview below...

How do you combine your family life with you music business?
It is hectic, very hectic. I am 30 years old but I know I am doing very well, handling all that together. It's been great. It's difficult but I am trying. Once you want something, you have to go for it.

For a while, your private life has been on the news, your wife, son and marriage, what is the truth?
It is my private life, so I want it to remain private.

How do you feel about people having an opinion about your life, interpreting every single move you make?
It is the life I chose. You see, a lot things happen in lives of people, but you don't know about it. A lot of things happen in the music industry that people don't know about. The stories are making me more popular and I am monetizing it. Opinions are welcome but it doesn't define a person.

Would you advise a celebrity to get married to a fellow celebrity just like you did?
Yeah. You see marriage is, if you are ready, you have to face the consequences for it. Getting married is one of the greatest things that happened to me and the greatest thing that happened to me after marriage is childbirth. My son is the greatest gift I have ever received in my life. If you must get married, make sure you focus on your home, and take care of your kids. Once you have children, it changes everything.

How has the birth of your son changed you? What do you usually do that you stopped since the birth of your child?
I came here in an uber. That is because I just feel like most times, driving all the big cars is trying to define who you are. I told someone, the day you see me walking on the street with a towel and in shorts, just know that the only person that can tell me "I am very embarrassed at what you are doing," is my son. So because of my son, there are a lot of  things I will no longer do. I used to be a very angry person but I am not amymore. I could hardly apologize to anybody before but from the 17th of July, when I am angry, whether you are the one that offended me or not, because I want to have personal peace, I apologize. Right now, if my son says 'daddy let's jump', I will jump. Money is not even what I want most in this life, peace is what I want.

You have made mention of your son a lot, why haven't you mentioned your wife?
My wife is good, she is working. She is actually on set right now. I love her so much, there is nothing I can do about it. The world will say what they want to say but you see, even those that are writing have their problems but they come on social media to behave like they are all holy and co. I know you have a father and a mother and there are sometimes they say 'no' and disagree. You see, sometimes, you disagree to agree. So whatever anyone want to write, they should continue writing. One day when they are tired, they will stop and I won't blame anyone because we are who we are. Because of our kind of business, we are out there. So there is no need to start arguing with anyone.

There were rumours that you and your wife separated and  living in different houses. How true is it?
That is my private life.

Did you open your new restaurant for your wife?
It is our family business, it is ours.

Any plans to have more children in the future?
I just want two children. Not because I don't want more, but if you look at the price of ticket, you will adjust. I want to start living the kind of life where I can wake up in the morning and I have worked for 2-3months and tell my family, 'alright, let's go to Singapore, Australia or Calabar.' Even big men these days are no longer travelling. When you hear the price of ticket, you sit back.

How many children does your wife want?
I wanted four, but she wants two and they are the ones that carry the child so you have to respect that. You know she has a job she's doing. By the time you try to cut short her passion, it's going to be very difficult for her, so you have to respect what she wants. That is another thing I want to advise men, It is no longer about what you want all the time. There are now two people that have become one, so you need to be in oneness in terms of decision making.

Would you allow your child go into acting just like your wife?
Yes, I will

How do you support your wife in her acting career, what do you do to show your support?
I try my best, it is the same business I am doing. I try to push her as much as I can in my own private way. I see her becoming the biggest in the industry. She has a passion, she is unstoppable right now.

Do you have a say in the scripts she accepts?
No, but even before I married her, if you look at her you would see she is not someone that like exposing her body in movies and all that. So, she already understands what she wants. If I start telling her what movies she is going to act, it is going to affect our relationship. She might do it because of me but doing that is going to affect her creativity. So I had to learn that through the process. For you to give them the opportunity to do and be the best in what they do, you have to let them decide. I am not saying exposing your body in movies is bad just that there are roles she always doesn't want to take.

What advise would you give newly married celebrity couples?
Spend time with your family, spend time with your wife. Try to know what they want. There is a mistake we newly wedded couples make, we believe once you just get married, you try to run on the street in pursuit of money but they want time. You need to spend time with your family especially the first one year. Get to know what they will say no to and yes to. I want to be a marriage counsellor. Everyday in marriage you learn new things, it becomes interesting because it makes you understand things you never did. I have a friend that says he dated his girl for 7 years but they got married and started having issues. That is because this thing, called ring (shows his wedding ring) gives you a different entitlement about life and marriage. Once you marry, that entitlement sets in,  'I am the oga, I am the madam' sets in. People need to be advised on time that the thing called marriage is different from dating. It is now a serious game. It is the best thing that can happen to anybody, it is the best thing that happened to me and the best thing that ever happened to me after marriage is my son. also, I am glad I took the advise to sit down in the labour room with his mom and welcome him. I know a lot of men won't do that but I think they should.

How was the experience?
The experience was traumatizing but it felt like a cloth was dropped off my face. From that day, I felt different.