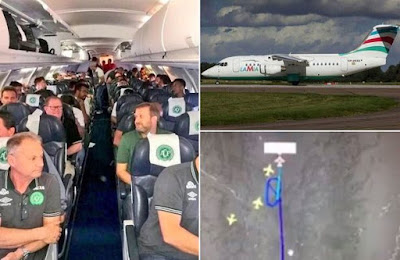 A minute silence will be observed ahead of all Champions League and Europa League matches next week, as a mark of respect to those who died in the plane crash that killed 71 people, including 19 players and officials of Brazilian team, Chapecoense.


The chartered flight carrying the team to Medellin for their Copa Sudamericana final match against Atletico Nacional, crashed on Monday night and officials have been told it was due to lack of fuel.
Only three players – defender Alan Luciano Ruschel, reserve goalkeeper Jackson Ragnar Follmann and centre-back Helio Hermito Zampier Neto – were listed as among the six survivors.

“European football is united in expressing its deepest sympathy to Chapecoense, the Brazilian football confederation (CBF), CONMEBOL (the South American confederation) and the families of all the victims following this week’s air disaster,” UEFA president Aleksander Ceferin said in a statement.

“This tragedy has shaken the world of football, and we would like to send our support to all of those affected by it.”
at 11:31 AM