Video: The moment a lion mauls its trainer 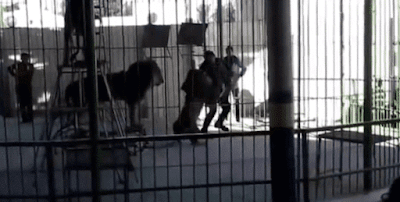 35-year-old Egyptian circus trainer, Islam Shaheen was preparing for what was supposed to be just another exciting show when the worst happened: he was savagely attacked by one of the lions he’d been dishing out instructions to.


The video shows him looking very much in control of the situation as he motioned to one of the carnivorous animals with a stick, while another climbed a ladder.

Suddenly, a third lion sprang at him quite unexpectedly, going for the kill as it tore into his skin as much as it could.

Other trainers are seen trying to get the lion off him with a stick as the frightened crowd screamed in terror, but the determined animal had already done more than enough damage.

Shaheen was later rushed to the hospital but died from severe injuries.

It was later learned that the late trainer had 10 years of experience with these lions, but the attack happened because the lion, who recently joined the troupe from South Africa, had been in its mating season and therefore been acting erratically.

It has been withdrawn from performing any more shows until it’s declared safe by a vet who was checking it.