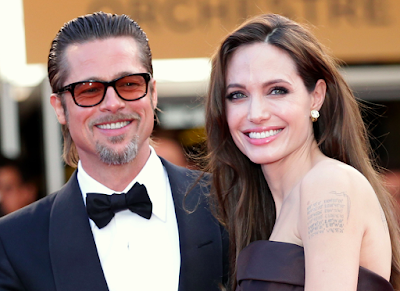 Angelina Jolie and Brad Pitt have been involved in a messy divorce since last year, with Angelina trying to gain sole custody of their six kids by accusing Pitt of being violent towards the kids. Now it has been revealed by TMZ sources that Angelina's real reason for everything is because she is hoping to score a top position in the UN and move with her kids to London.


Moving with the kids she shares with Pitt all the way to London will not be possible except it's proven that Pitt is an unfit father and these are allegedly her reasons for trying to make Pitt out as a violent, unattentive father. The sources also revealed that Jolie and Pitt have not been getting along well for more than a year and she had been looking for an opportunity to end the marriage and leave with her kids for London believing that a move to London will bring her closer to clinching a UN job.

Jolie has allegedly been taking advice from two women, one is a member of England's House of Lords, and the other also holds a U.K. government position. These women have been convincing her of the possibility of becoming the Secretary General of the UN if she does everything right and she pays these women handsomely for their counsel. It was allegedly for this reason that she accused Pitt of abusing Maddox during a flight and got the Department of Child and Family Services, DCFS, involved in the abuse allegations.

Recall that Jolie is involved in a number of humanitarian activities and was made an Honorary Dame by Queen Elizabeth II for her humanitarian endeavours. This makes it a possibility for her to get a UN appointment if she sets her sight on it.

Meanwhile, Jolie's reps denied these allegations and said Jolie only wants what's best for the children and doesn't have any such move planned. They added that she intends to continue therapy with the kids and Brad.
at 5:03 PM