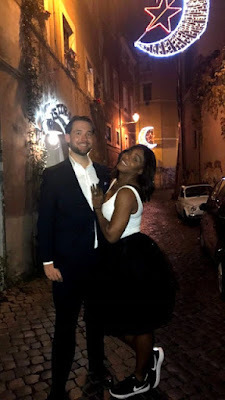 Serena Williams is finally opening up about her engagement to Reddit co-founder Alexis Ohanian.

According to Serena, she’s smitten with her beau because he’s a “nice guy” who “treats everyone the same.”

Speaking to the press after securing a first first-round victory in the Australian Open, Serena said of her engagement:

“It feels good. I really haven’t thought about it too much, because I wasn’t even really gonna think about it until after the tournament. So, I just keep saying, ‘February, I’ll start looking at the bigger picture of my life. But right now I’m just so focused that this is all I can think about.

“He’s incredibly — a really nice person. I think he definitely treats everyone the same, which is really cool to see. Really, really nice to see.”
at 1:01 PM