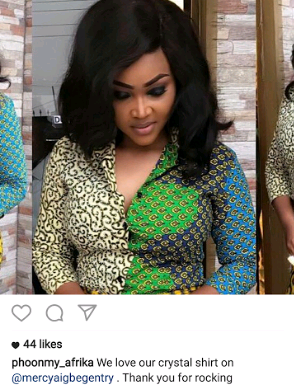 Designer, Phoonmy Afrika took to her Instagram to call out actress, Mercy Aigbe for showing off a dress she made for her and tagging another designer.


Read what she wrote below.

"As someone who had worked behind the camera in the Nigerian Entertainment Industry popularly called Nollywood and now a Fashion Designer,  I picked an interest in two Nollywood Stars @mercyaigbegentry and @jumokeodetola for two different reasons but as the Yoruba adage says: Isunmoni la nmo ise eni. On a closer look you get to know that these people are not what they portrayed. Jumoke Odetola in her case lived up to standard as we approached her to flaunt one of our designs on social media, she responsibly did as agreed an even advertised our company to a few friends while Mercy Aigbe on the other hand collected the sewn garment, wore it to occasions, flaunted it on IG and refused to tag our Company which was the gentleman agreement we had. The problem here is not the fact that Mercy did tag us but her mannerisms when we approached her. Mercy slyly responded well to our chat saying she would do a 'rerock' and tag us but immediately blocked our comments on our post then blocked us on instagram. We put a call through to Jumoke who acted as our link to Mercy tried to pacify the situation but another conversation with Jumoke's manager spurred our anger. According to Mr Abiodun Jimoh @abeyjomo, on telling Mercy Aigbe that she shouldn't have worn the clothes since she knew she wouldn't give the Company that gave her the garment the credit, Mercy had replied that she has worn it and there's nothing anyone can do about it. When we sent a message through Mr Jimoh that we would like to have our garment back. Mercy said it they can come and pick it, she later said No! She would not give it back. The big questions are? Did Mercy believe we gave her our clothe as Charity? Is she from a motherless baby's home? Does she feel so untouchable because she is a cheap star that she is? Does she by anyway know with whom she is dealing with? Things are about to get messy with Mercy and she should be ready for us because if we have to rip our clothes off her skin, we will... just to have it back."
at 12:36 PM