George Clooney's wife Amal pregnant with twins; a boy and a girl 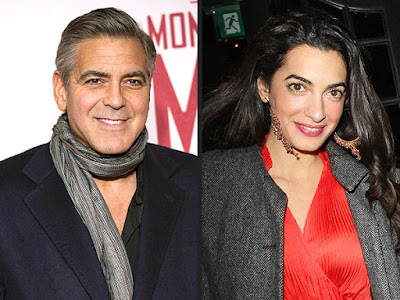 George Clooney's wife Amal is reportedly pregnant with twins, and has even learned that she will be having a boy and a girl.

This is according to a report by InTouch Weekly released on Wednesday. 55-year-old Oscar-winning George, who once vowed he would never get married again or have kids, is said to be over the  moon and ready for the challenge of having two children at once.

A source told the publication:

'George has gone from never wanting to be a father to being totally excited about Amal's pregnancy and the thought of raising two children who will call him Dad.

Amal is pregnant with twins: a boy and a girl. When Amal and George found out it was twins, they were surprised, but also a little scared because they both had said that one was enough.

But the news that it was both a girl and a boy made them really happy. They feel like they've hit the family jackpot.'

This comes after 38-year-old human rights lawyer Amal appeared to show off a bump in a floral dress at a screening for The White Helmets in London on January 9. Then again on Tuesday she seemed to have a bit of a belly at the Women Of Impact dinner in Switzerland.