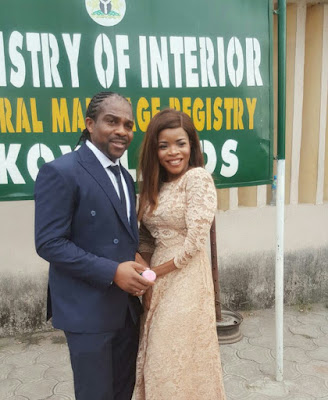 After lots of people talked about the photo being photoshopped because Laura is allegedly pregnant, Kemi Olunloyo has also come out to critique the photo.

She shared the photo and wrote;

"#HNNLove Congrats to #LauraIkeji on getting married. However many ppl have asked me to critique this picture as a #socialcritic. The photo is retouched. That is not her hand. Too bony, people say she's hiding a baby bump. Registry marriages usually mean you are either pregnant or poor. For Laura Ikeji and a brother of a footballer? What happened to your double wedding shit in #Nigeria? Traditional and white. So what if she's preggo? Bout time one of those gals gave their mom a grandchild. One thing very wrong in this picture is the Ogbonna Kanu dude's hair. Its disgusting. He has a receding hairline those braids are pulling back and moving steadily. He will have that #rihanna forehead full blown soon coupled with being bald. His braiding person should be shot at the firing squad. He looks messy! Total rating for the loud money hungry Ikeji girls, Linda could have gifted her a more decent wedding dress . For crying out loud, Laura calls herself #FashionBlogger of 2016... in what country??? #hnnstyle"
at 12:16 PM