Man thanks OAP Freeze for helping secure his dream job 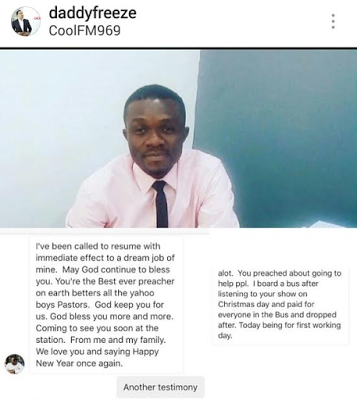 Cool FM OAP, Freeze, who opposes the idea of men of God making money from church members, shared a message he got from a man who just a new job and believes abiding by Freeze's word is what got him the job.


Freeze has been known to preach against tithing and fattening the purses of preachers, asking people to instead give to the needy around them.

According to the man whose name was withheld, he claims he put Freeze’s preaching into practice by paying the bus fare for every passenger in a bus he boarded then also sent oat for every customer in a barber’s saloon and shortly after, he landed a dream job.

Freeze shared a screenshot of the message with the caption;
Another testimony from someone who paid attention to my teachings. I decided to cover his name, because he is in the corporate world, but I'm sure many of you still know who he is. It's only the fourth day of 2017 and here is another genuine testimony!

I didn't ask him for a gift or money of 10 percent of his income, all I told him to do was love his NEIGHBOUR as JESUS instructed, in a video I posted on Christmas Day. It's still there on my timeline.

He tapped into the annointing by boarded a bus and paying for everyone on board, he then went into a barbers salon and paid for everyone there, showing love to strangers!
Yesterday, he was blessed with a phone call and an awesome job with a salary increase in this RECESSION!!
----------------------
Let me lead you to Jesus dear people, Jesus doesn't need your January salary neither does he need 10 percent of your pay check..... Love your NEIGBOR as yourself and take care of the needy is all he asks you to do.....

I will be giving out simple instructions from time to time as I teach you the word and the next testimony might just be yours. ~FRX
at 2:45 PM