Miss Kenya was asked about Donald Trump; her answer shocked the world (WATCH) 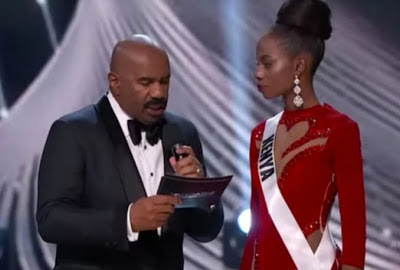 At the Miss Universe 2017 pageant, Miss Kenya was asked about President Trump and she had the most unexpected response at a beauty contest.

The question was directed at her by Celebrity TV show host Steve Harvey, during the pageant held in Manila, Philippines.

"Arguably no US president has had more active 10 days in office. What are you most excited about and what concerns you when it comes to the Presidency of Donald Trump?"

The beauty queen took a long pause before answering the question. And her answer left jaws
dropped, and the last 8 words had the entire room erupting.

"Politics.... ahh OK let me just start again. Donald Trump, have been elected as the President of the United States, may not have been the choice of many people living in the United States because of the divided support system for the outgoing President Barack Obama, who has supporting an upcoming woman President....who was supposed to be a woman President Hillary Clinton. So so many people oppose his position. But i feel that once Trump took up his position, he was able to unify the entire nation," she said.

Her answer that Trump unified the USA has got everyone talking while others wondered why she was asked a question about American politics yet she was from a different country.