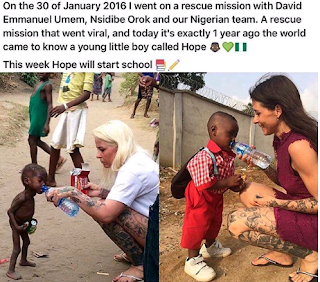 Uyo based Danish humanitarian, Anja Ringgren Lovén gained fame and accolades, last year after she rescued, rehabilitated and adopted Hope, a small boy abandoned by his family in Akwa Ibom State, for being a 'witch'.

One year after, she posted a before and after photo with Hope as he set out for school. OAP Freeze used the photo to call out RCCG. Read what he wrote after the cut...

"Redeemed was busy setting up churches on every street, yet they missed this boy..... I bet with you, that there was a Redeemed church within walking distance from this starving child, branded a witch by the same doltish belief system that extorts your first salary every January, having you willingly give your hard earned money in a recession, to a church where the G.O has a private jet and leads a life of sheer opulence!
-
The Nigerian Pentecostal church brands people wearing tattoos as bad and 'unchristian' whereas this woman with all her tattoos is more Christ like than all your 'Daddy GOs' can ever be. What she is doing is all Jesus requires of us, Jesus NEVER COLLECTED TITHE or first fruit and his disciples didn't collect it either!
As a matter of fact, no Christian church collected tithe for 600 years after Christ died and resurrected.
-
History claims that Mungo Park discovered the Niger and we wonder "what were the Nigerians living around the Niger doing, that it had to take a foreigner to discover a river we were bathing in and washing from?" My answer was simple "The same thing we were doing when hope was found" ~FRZ
-
P.S. Anyone that demands your entire January salary from you, in this recession, is a thief! Anyone who gives it is a fool!
#FreeTheSheeple"
at 5:45 PM