Selena Gomez & The Weeknd pack on PDA in Italy 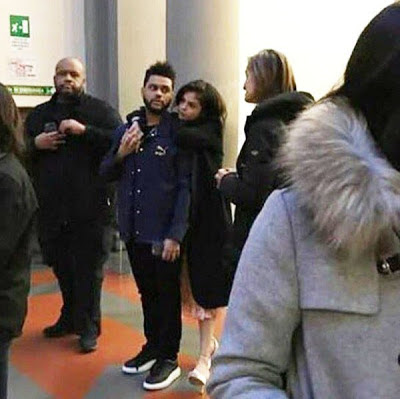 It looks like things are heating up for Selena Gomez and The Weeknd!


The 24-year-old actress and singer and the 26-year-old “Starboy” crooner were spotted with their arms wrapped around each other on Friday (January 27) in Florence, Italy. (via TMZ).

The hot new couple enjoyed the local art at the Uffizi Gallery Museum. When they were finished with their visit, security reportedly moved the crowd outside out of the way so the duo could quietly make their exit.

We're told there were about 20 people waiting to get in who were pushed aside so Selena and her beau could get out. There was at least one bodyguard with them.

Seems like things are getting serious, our source says they even kissed in public ... as they were boarding an employee elevator to make their exit.

It's interesting ... Selena's BFF, Taylor Swift, jetted off to Italy with Tom Hiddleston when they first started dating, and we know how that ended.
at 3:22 PM