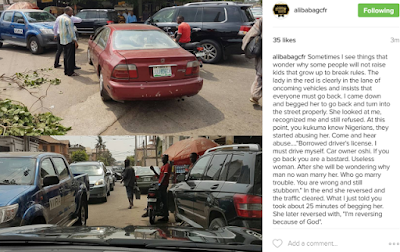 Veteran Comedian, Alibaba, narrated this eyewitness account of his interaction with a female driver, who failed to heed the voice of reason until she got insulted and orally dragged by people at the scene.


According to him:
Sometimes I see things that wonder why some people will not raise kids that grow up to break rules. The lady in the red is clearly in the lane of oncoming vehicles and insists that everyone must go back. I came down and begged her to go back and turn into the street properly. She looked at me, recognized me and still refused.

At this point, you kukuma know Nigerians, they started abusing her. Come and hear abuse...."Borrowed driver's license. I must drive myself. Car owner oshi. If you go back you are a bastard. Useless woman. After she will be wondering why man no wan marry her. Who go marry trouble. You are wrong and still stubborn." In the end she reversed and the traffic cleared. What I just told you took about 25 minutes of begging her. She later reversed with, "I'm reversing because of God
at 2:55 PM