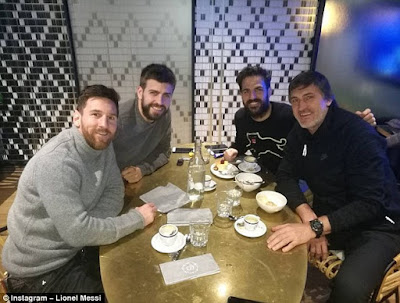 Before scoring the third goal against them in a dominant victory, Chelsea star Cesc Fabregas spoke of the special place in his heart that he will always reserve for Arsenal.


But the former Gunners captain appears to have an even bigger area kept for his other former club, Barcelona, or, more specifically, the life-long friends he acquired while coming through their famed La Masia academy system.

Having helped strengthen Chelsea's grip on the Premier League title, Fabregas travelled back to the city of his birth to catch up with Barcelona stars Lionel Messi and Gerard Pique.

Messi, who himself scored for Barcelona in their weekend victory over Athletic Bilbao, posted a picture of the two stars and his long-term confidant Pepe Costa enjoying a catch-up together with the simple caption: 'Meal with friends'.

And, with Chelsea's next game not scheduled until Sunday, Fabregas need not rush back to west London and may even find time to catch Barcelona's crucial Copa del Rey clash against Atletico Madrid.
Barcelona welcome their title rivals to the Nou Camp on Tuesday evening for the semi-final second leg and take a narrow 2-1 lead into it after last week's gripping away tie.
at 5:50 PM