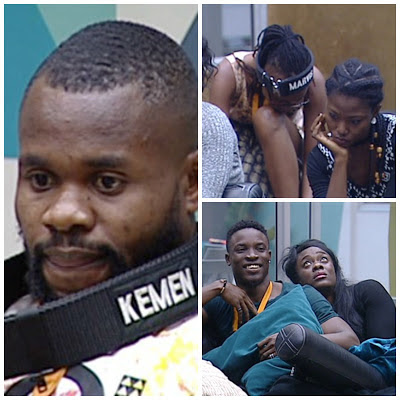 Big Brother Naija Biggie has decided to nullify all this week's nominations following the strike he issued to Kemen and the warning to Marvis for conspiracy and instigation.


Biggie says he has video evidence in which Kemen and Marvis are seen plotting to nominate Ese and Jon and yet according to the rules and regulations of the Big Brother Naija house, such behaviour and acts are not allowed in the house.

Biggie also informed Bally and Bisola that their advantages won't be in play this week.

And now that Biggie has cancelled the nominations results for this week, he will personally select the
housemates to be up for eviction this week.

Biggie has informed the housemates that he's not sharing with them which housemates he's putting up for possible eviction this week, he told them that he's only sharing this information with the voting public.

However the truth is that there will be no voting this week.

This means that throughout the entire week, the housemates won't be aware of who is up for possible eviction.

So far, four housemates have been evicted from the house; they were Soma, Miyonse, Coco Ice and Gifty.

The winner of the 11-week contest will be given 25 million Naira prize and a brand new Kia Sorento SUV car. The series which started in January will run for 78 days and end on April 9.
at 3:52 PM