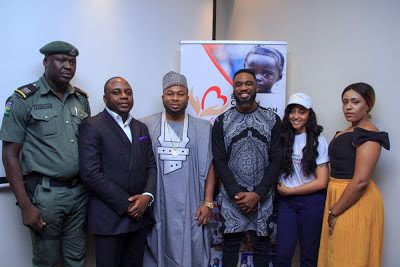 
The signing and papers works was done at the Ikoyi office of the foundation's boardroom.

A‎ddressing the board members of Lagos office, the Chairman, Dr. Olakunle Churchill said they needed a new Ambassador for the Big Church Foundation to spearhead the Agriculture and Mining
project which is targeting the Nigerian youths.

He further buttressed on the choice of Praiz as worthy one, who has also worked with the Big Church Foundation during charity campaigns in the past. " We congratulate you and we know with your presence we can achieve a lot in the area of charity empowerment and project executions nationally and internationally"

Big Church Foundation which has offered university scholarship, made donations to the less privileged, Visited crisis ravaged areas, supported hospital patients, partnered with charity events and hosted empowerment campaigns unveiled Praiz to pilot the empowerment of 36,000 youths in Nigeria through the 36 states. 1,000 youths from each state are to be empowered through talent hunts, skill acquisition, loans, small business starts and job creation.

Also at the unveiling board conference was the current Ambassador for Women and Child, Actress Rosaline Meurer her key charity portfolio is the Orphanages, Girl Child and nursing mothers. Signed since 2015, with Television Personality  Amb. Rachel Bakam signed in 2016 for Media & Charity Awareness Campaign, they are now joined by Praiz who heads the Project Empowerment Portfolio. Mr Paul the personal Assistant to the Chaiman, Project Manager and Business Analyst expressed optimism over the signing and role the artist will play in the Agric/ Mining Summit of Big Church Foundation flagging off in a couple of weeks. Other members present were the Foundation Executive Manager of Abuja branch - Tomiwa, Yebo -Foundation coordinator/ PR
Mr. Raphael Cudjoe - Head of IT, Clay - Multi-Media Department, Maureen Cyril of GoodGirl Foundation, Ivy Cypriel of Crown & Glamour TV ‎and others.