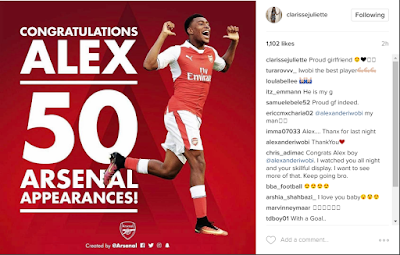 Clarisse Juliette can't stop gushing about her Alex Iwobi's success as she expressed her delight following his 50th club appearance for Arsenal against Watford on Tuesday.


Despite the Nigerian registering his name among the goalscorers, Arsene Wenger's men were unable to secure a point at the Emirates Stadium.

Juliette seems to be enjoying his lover's laudable achievement and has called herself a 'proud girlfriend' to have the 20-year-old Super Eagles player.
at 5:26 PM