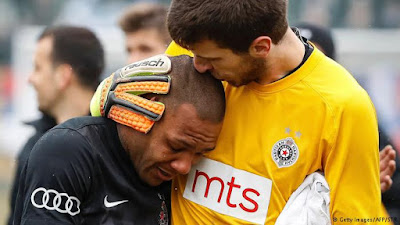 
Luiz, 28, was jeered and taunted with monkey noises every time he touched the ball and some Rad fans unfurled a banner insulting the Brazilian towards the end of the game.

At the final whistle, Luiz made a one-fingered gesture in the direction the Rad fans, who reacted furiously, prompting the home team's players to confront him.

A full-scale brawl broke out and police had to move in to prevent tensions spilling over as Luiz headed for the dressing room in tears.
at 5:01 PM