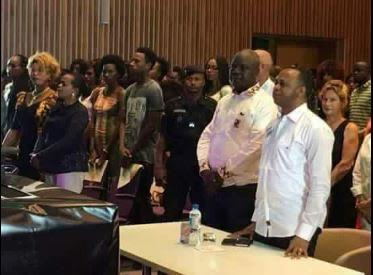 The Guinean government has temporarily placed a ban on beauty pageants after the skimpy outfits in the swimwear section caused outrage on social media.


The ban comes after the 2017 Miss Guinea competitors were paraded in their bikinis in front of the Prime Minister Mamady Youla on Saturday, February 11, 2017.

Several Guineans on social tagged the competition a 'total shame',  while one publication, Flash Guinea, asked in its headline if the prime minister was encouraging prostitution.


In a statement released by Culture Minister, Siaka Barry, he said the ban will run until after a new code of ethics has been drawn up.  He also added that the government has ended its contract with the organisers of the beauty pageant.
at 4:09 PM