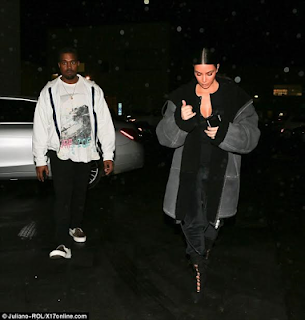 Power couple, Kim and Kanye, seem to be gradually easing into the Valentine mood. The pair were seen out last night at an Italian eatery after stopping off at the celebrity hot spot Epione.


Afterward, they stopped by at Baskin-Robbins where Kanye can be seen munching on an ice cream cone.

The love birds were plagued with rumors of a troubled marriage earlier in the year, following Kanye's breakdown, but they seem to have resolved their differences and are back to being the romantic couple we all love to keep up with.
at 5:44 PM