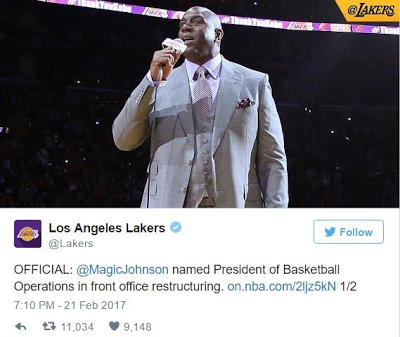 In a front-office restructuring move, former Lakers great Earvin "Magic" Johnson was named as the team's president of Basketball operations.

Jeanie Buss, the Lakers governor, made the announcement on Tuesday, February 20, 2017.

Johnson returned to the Lakers on February 2nd to advise ownership on basketball and business. He wasted no time on what his intentions were, telling USA Today after he was hired he wanted to be in charge. With this new role, Johnson will end his work with ESPN, where he was on the show "NBA Countdown."
at 1:21 PM