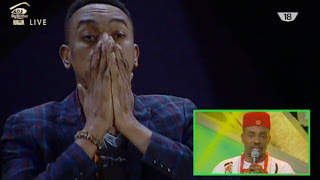 Miyonse was evicted tonight alongside Soma after spending just two weeks in the Big Brother Naija 2017 house. He is the second housemate to be evicted.

When Miyonse learnt his 'boo' TBoss nominated him, he said he wasn't shocked, rather, he was disappointed.

When asked about the future of his current relationship outside the house, Miyonse said he was going back home to his woman.