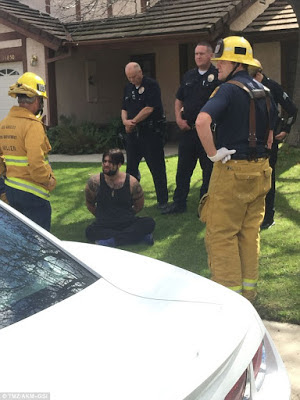 Nicholas Cage's son, Weston Cage, was arrested over the weekend for driving under the influence, DUI, after he got into a minor car accident and fled from the police during a chase.


The 26-year old actor and son of actor Nicholas Cage with ex-girlfriend, Christina Fulton, was driving a Chevy Camaro on Saturday afternoon when he got into an accident in San Fernando Valley.

The father-of-one settled with the other driver and exchanged information before fleeing the scene for fear of the police being called in.

He then led the police on a chase during which he lost control of his car, veered onto a lawn, and took out a row of mailboxes and a street sign. His car was stopped after it crashed into a tree and he was arrested. Prior to his arrest, Weston stopped by at the hospital to get checked out for injuries.

This is not the first time Weston is getting on the wrong side of the law. In 2011, he was arrested twice for domestic violence towards his first wife Nikki Williams. He later checked into a rehab to treat alcohol addiction and came out saying he was now sober.
at 3:40 PM