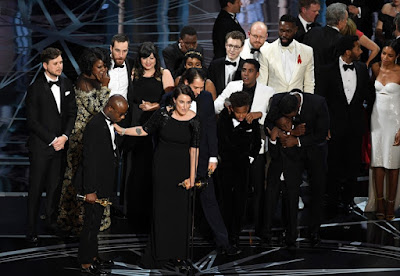 A Steve Harvey Miss Universe 2015 scenario, play got replayed at the 89th Oscar Awards that was held last night.

Though it's still unclear why Beaty and Dunaway could read out a wrong name, but it sure did ruin the night for the true winner of the Best Picture category. Warren Beaty and Faye Dunaway who announced the award were a bit hesitant, before Dunaway eventually declared La La Land the winner.

However, as the announced winners took to the stage to celebrate, they were cut off mid-speech by the organizers, and Warren Beaty apologized and announced that the winners of the Best Picture was actually Moonlight. The printed paper was also held out to put off the confusion, that sprung up on the stage.
at 1:42 PM