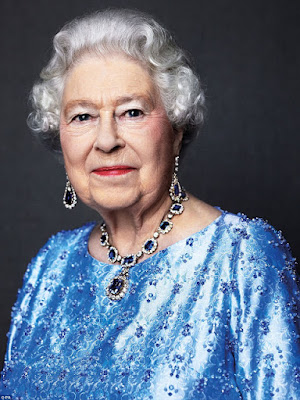 Queen Elizabeth yesterday marked her Sapphire Jubilee as she became the first British monarch in history to have reigned for 65 years.

To mark her latest milestone, a poignant photograph of her wearing a suite of sapphire jewellery given to her by her father King George VI as a wedding gift in 1947 has been issued.

Sapphire is the 65th anniversary gemstone and the King’s gift to his eldest daughter, then Princess Elizabeth, featured a glittering necklace, dating from 1850 and made of 16 large oblong sapphires
surrounded by diamonds, with a pair of matching sapphire and diamond drop earrings.

The newly released portrait was taken by David Bailey in 2014, for the Government’s ‘Great’ campaign, which aims to promote the UK abroad.
‘She has very kind eyes with a mischievous glint,’ he said at the time. ‘I’ve always liked strong women, and she is a very strong woman.’
at 1:56 PM