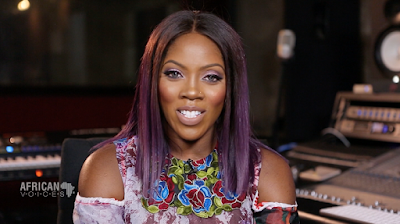 This week ‘African Voices’ meets one of Nigeria’s biggest stars, Tiwa Savage, whose vocal talents have taken her from humble roots in a church choir to singing in Los Angeles with some of the industry’s biggest stars.


The programme reports from Lagos, where ‘African Voices’ discovers what made Savage return to Nigeria and build her career at home.

‘African Voices’ learns that finding success at home was an uphill climb, as Savage explains:
“When I first moved to Nigeria, I got a lot of people discouraging me about being a female artist, and a lot of people didn't want to invest money or time because they didn't think I was lucrative…. Female artists are huge in other parts of the world. It shouldn't be different in Africa."
Savage’s musical career began at 16 years old, when she was singing backing vocals for the late pop star George Michael.

‘African Voices’ learns that this not only allowed Savage to move to Los Angeles in the United States, but also collaborate with other notable musicians such as Akon, Kat Deluna and Fantasia.

Savage explains to the programme what made her decide to return to Lagos:
“I worked with a lot of people, and they would be interested by my name… ‘Where’s that from?’ I’d say it’s Nigerian, West African, and they’d say, ‘You’re African?’ and fascinated that I was straight from the Motherland… This was a lightbulb moment. These people were interested in Africa, and here I was running from it.”
Having now returned to Nigeria as a recognised star, Savage explains how life in Lagos has changed since leaving at a young age:

“It's overwhelming, as well. My family is from here… It's a great feeling, but sometimes you really just want to run, get something and go back home.”
‘African Voices’ accompanies Savage to several personal landmarks around the city, including Maven Studios, where she is currently recording, as well as the City Mission Methodist Church, where Savage had her first audition as a singer.

Reflecting on what she has learnt on her journey and the decision to build a career in Nigeria, Savage tells ‘African Voices’ what advice she would give her past self:
“Believe in Africa. Believe in yourself, and believe in Africa.”
Also in this week’s ‘African Voices’, the programme travels to South Africa to meet meets world-renowned singer Thandiswa Mazwai and reports from Zambia, where it meets rising freestyle star, Fungai Chileshe.
at 2:07 PM