Tonto Dikeh deletes all photos of estranged husband on Instagram 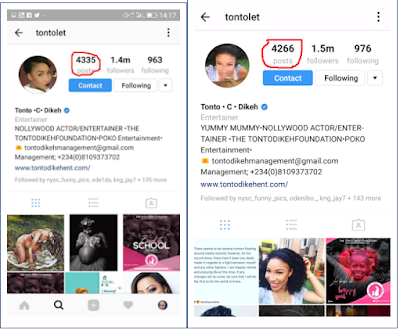 After confirming that she has separated from her husband, Oladunni Churchill, popular Nollywood actress, Tonto Dikeh, has deleted all her estranged husband’s photos from her Instagram page @tontolet.


Checks have revealed that the mother of one also deleted all photos from her traditional marriage with him.

Recall that the ace actress confirmed the separation while responding to questions from her fans on Instagram.

Tonto also said she blocked her husband from accessing their son since they went their separate ways, but that he can see him when he wants, as he had the contacts of his nanny and part-time help.

Tonto has been married to Churchill for 17 months and rumours about the marriage falling apart had been in circulation for a while.
at 3:18 PM