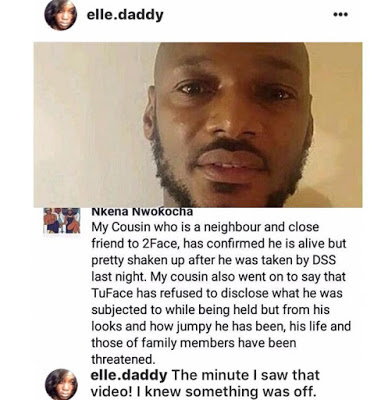 A Facebook user had claimed Tuface Idibia was picked up by the DSS before cancelling the planned nationwide protest. According to Nkena Nwokocha;

“My cousin who is a neighbour and close friend to 2face has confirmed he is alive but pretty shaken up after taken by the DSS last night. My cousin also went on to say Tuface has refused to reveal what he was subjected to while been held but from his looks and how jumpy he has been, his life and that of his family members have been threatened”.

Tuface says this never happened. Read his tweet below.