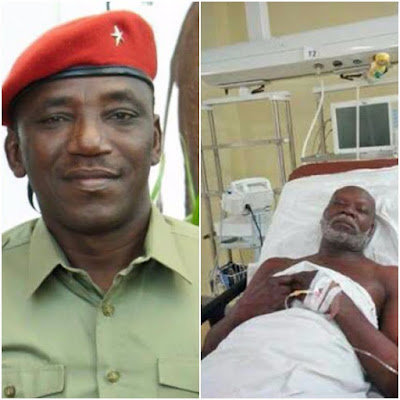 
The boxer popularly known as Bash Ali has filed a civil suit at an Abuja High Court seeking N1bn damages from the minister for the injuries he allegedly suffered when Dalung’s aides beat him up in Abuja about two weeks ago.

Apart from the sports minister, other respondents in the suit are the Inspector-General of Police; the minister’s aides, Nansel Nimyel, Charles Boga, and another simply identified as Mr. Joseph.

According to the motion filed by the counsel for the boxing champion, B. O Nafagha, the pugilist is seeking “an order of the court declaring the assault, beating and treatment of the applicant by the respondents on February 13, 2017 as unlawful, illegal, unconstitutional and a breach of his fundamental human rights.”

Ali is also seeking an order of the court “compelling the respondents  to pay to the applicant the sum of N1bn only as compensatory damages and public apology in two national newspapers for the breach of his fundamental human rights  to his dignity as a person on 13th of February, 2017.

“An order of the court compelling the respondents to pay to the applicant the sum of N8m only as cost of litigation as a result of the assault, beating and treatment meted on the applicant.”

Ali in the suit said Nimyel started the assault on him, while Boga and Joseph allegedly beat him with gun butts.

The boxer in his deposition said, “I was unconscious for about an hour until the ministry sent for paramedics who then carried me in a stretcher to the ministry’s staff clinic where I was given first aid treatment and when they saw that I was in extreme pains, I was immediately transferred to the Emergency Ward of the National Hospital where I stayed for about eight hours before I was rushed to the Trauma Department at National Hospital where I spent two days.”

He added that as a result of the assault and humiliation, he was forced to brief a lawyer who charged him N8m to sue the respondents.
at 4:41 PM