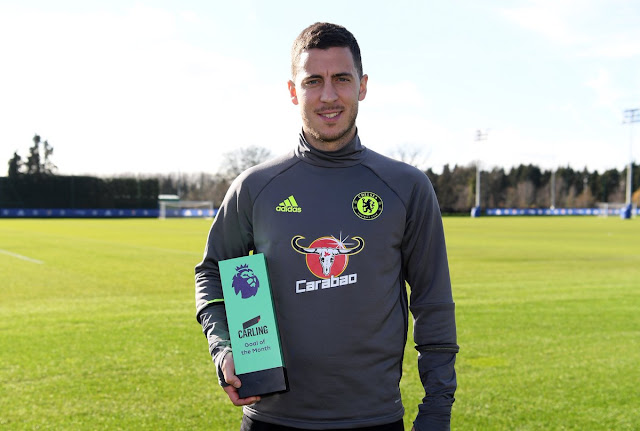 Chelsea star Eden Hazard has picked up the February award for Premier League Goal of the Month after his brilliant run and finish put Arsenal to the sword in the 3-1 win at Stamford Bridge.


Hazard was a popular selection chosen from the combined votes of a panel of experts and the public, seeing off competition from Leicester City's Danny Drinkwater and Burnley new boy Robbie Brady to scoop the second prize of the year.

Hazard has been instrumental in helping the Blues develop a commanding lead at the top, and after scoring a sublime opener in the 2-1 win at West Ham, the diminutive playmaker has been recognised for another excellent strike.

With the Blues leading 1-0 against the Gunners on February 4, Hazard picked up the ball on the halfway line with plenty of work to do.

He looked up and embarked on a solo run which took him past Laurent Koscielny and then left Francis Coquelin on the floor before skirting beyond the Arsenal captain again and firing past Petr Cech for his third goal in his previous four home games.

It was a decisive contribution from the Belgian in what could prove a season-defining moment, with his celebrations after the magnificent effort showing the significance of the strike.

'It is one of the best Premier League goals I have scored for sure,' Hazard said. 'I was not thinking about scoring but step by step I came close to the goal and in the last 10 metres I was alone.
'When the ball went in I felt that I created something special so I was happy.'

Hazard is the second Chelsea player to win the award this campaign, after Pedro's goal against Tottenham earned the November prize.

Chelsea are 10 points clear of Tottenham and Manchester City and need 24 points from their last 11 Premier League games, but they will turn their focus on sealing a FA Cup semi-final place against Manchester United on Monday.

Meanwhile, the Belgian has underlined his commitment to the Blues amid renewed interest from Real Madrid.

The 26-year-old stated earlier this season that he would only entertain the idea of leaving Stamford Bridge if he won the Premier League title again - an eventuality that could come to fruition this May.
Hazard said: 'If I ever leave, it'll be after winning a championship. You need to go out on a high so that people remember you for the right reasons.'

But despite the likelihood of Antonio Conte's side not being caught at the summit, Hazard will not push through a move to the Bernabeu this summer, with three years remaining on his current Chelsea contract.
at 3:44 PM