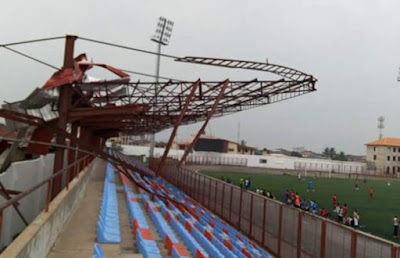 The roof of the Akure Township stadium in Ondo State was on Friday blown off by heavy rainstorm.


The storm also caused havoc on some buildings around the stadium.

The stadium is where the state football club, Sunshine FC normally plays its home matches in the Nigeria Premier League.

The Stadium was renovated by former Governor Olusegun Mimiko in 2010.

The rain which started at about 3:30 pm on Friday was accompanied with a heavy rainstorm that blew off the roof of the Stadium.

Some houses around the stadium were affected as electric poles fell on them.

A woman was said to have escaped death.

Residents blamed the incident on the alleged shoddy work by the contractors who handled the project.

The Deputy Governor, Arakunrin Ajayi Agboola, who visited the scene of the incidence identified with the victims of the unfortunate accident and thanked God that there was no loss of life.

He assured the people on behalf of the Governor, Arakunrin Rotimi Akeredolu that appropriate action would be taken.
at 1:00 PM