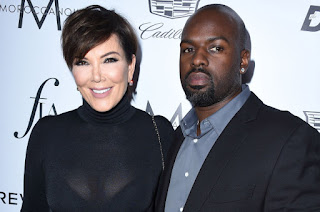 It was reported they split so she could 'focus on her family and [TV] show right now.'


But Kris Jenner and Corey Gamble scoffed at rumors of a breakup on Wednesday, according to TMZ.
'100 percent not true,' sources close to the couple told the site and that there wasn't even so much as an argument between the pair.

News of Kris, 61, and Corey's, 36, split came as a surprise to those who witnessed the chemistry between the May-December couple on Keeping Up With The Kardashians.

Rumors surfaced the day before of their breakup via Radar Online when a source claimed: 'She said that she was getting side-tracked with this relationship.

'She needed to put her family before her own needs and wants,' the insider added.
Kris started dating Corey in November 2014 after the breakup of her marriage to Bruce, now Caitlyn, Jenner.