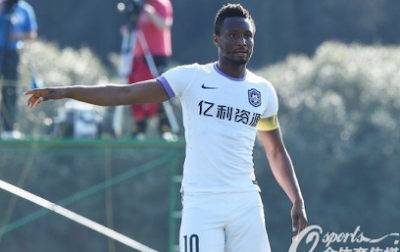 
Mikel has not trained with the rest of his teammates for days now due to a muscle strain.

The Nigerian international who has featured in Tianjin TEDA's first two games in the Chinese Super League is reportedly undergoing a traditional Chinese acupuncture treatment, which is a form of alternative medicine in which thin needles are inserted into the body.

Mikel's coach Jamie Pacheo told newsmen: "For Mikel also it is difficult to participate in the weekend and Lifan's game, but fortunately the Serbian international Goodyear back.

"If he was still with Chelsea, the injury may be for about three or four weeks, but in TEDA ten days or so he will resume training, and simply fast."

Mikel's compatriot Brown Ideye is expected to lead Tianjin TEDA's attack as they seek their first win and first goal of the CSL campaign.
at 5:39 PM