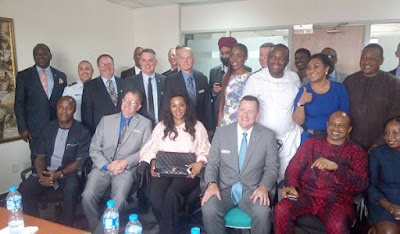 Members of the American War College and officers of the United States Air Force, on Monday, 27 January, visited the office of the Africa International Film Festival (AFRIFF) in Lekki, Lagos, for a historical tête-à-tête with some of Nollywood practitioners and stakeholders.


The AWC said they were in Nigeria for fact-finding and that Nollywood, the second largest producers of video films in the world, was one of the sectors they wanted to understand.

Lt. Colonel Bill Curlin of the United States Air Force who led the delegation noted that it is important to America that it understands Nigeria beyond its political state, and to find other areas of interests, including security, that could be of benefits to both countries.

“It is not enough to understand Nigeria from the angle of the politicians or political decisions being made, but to fully grasp the understanding of various sectors which when put together, form a unified and formidable front,” he stated.

Sharing his thoughts on the visit of the American delegation, Eyengho who noted that the meeting was very engaging from both sides said, “We told them what they ought to know and do so as to deepen the Nollywood brand they care so much about.

According to filmmaker who hinted on the menace of piracy in the sector, “There is basically no way to put up a fight against the pirates because they are more organised with a definite plan as to mode and means of distribution, aided by the right finances and channels.” He added that Nigerian content is not protected on the internet and advised that “co-production treaties should be encouraged so as to foster better and more global productions that cut across borders and are better structured.”

Also speaking, Nollywood actress Kate Henshaw noted that the issue of social satires are not commercially viable in Nigeria. “Nigerians do not take culture or heritage seriously, and we are gradually drifting away from what we have always known to a new world order. People are not really seeking relevant themes but are more interested in comic and feel-good themes that shy away from the truth and nothing more,” she said.

Speaking with The Nation, Colonel Paul H. Nelson, a surgeon in the United States Air Force buttressed on the relevance of the visit, saying: “Being a facilitator in the Department of International Security Studies, I tend to want my students to understand the world they will be operating in because that would prevent any form of altercation. Personally, I have realised that we all are one; irrespective of race, we tend to care about the same things; family, survival, a better source of livelihood and the lot.”

The meeting drew to a close with the presentation of a token – the shudder of an airplane – to the Nollywood practitioners by Curlin.
at 4:04 PM