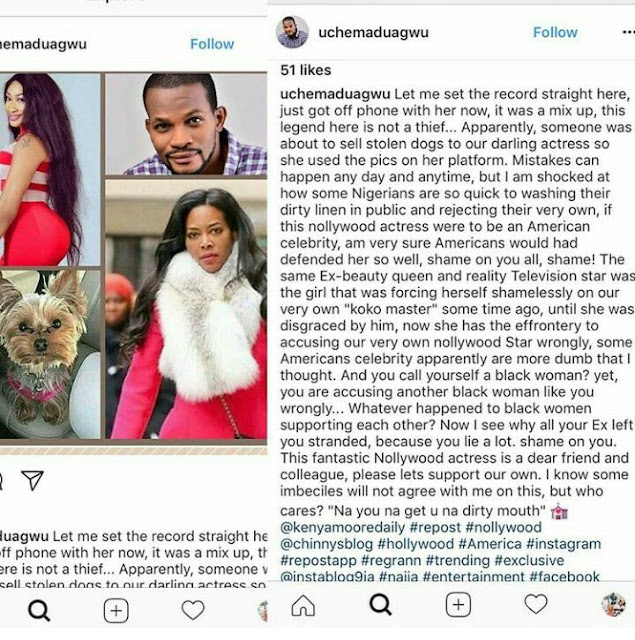 According to Nollywood actor, Uche Maduagwu, he just got off the phone with Nollywood actress, Oge Okoye who has been accused of stealing dogs that belongs to American actress, Kenya Moore.
According to him, Oge Okoye alleged that someone wanted to sell stolen puppies to her, so she used their picture on her platform, not knowing it belongs to some other person.


Uche went on to blast Nigerians for rejecting their own and washing their dirty linens in
public. He also disclosed that Kenya Moore was the lady forcing herself on Nigerian music star, D'banj.

Here's what he wrote;

"Let me set the record straight here, just got off phone with her now, it was a mix up, this legend here is not a thief... Apparently, someone was about to sell stolen dogs to our darling actress so she used the pics on her platform. Mistakes can happen any day and anytime, but I am shocked at how some Nigerians are so quick to washing their dirty linen in public and rejecting their very own, if this nollywood actress were to be an American celebrity, am very sure Americans would had defended her so well, shame on you all, shame!

The same Ex-beauty queen and reality Television star was the girl that was forcing herself shamelessly on our very own "koko master" some time ago, until she was disgraced by him, now she has the effrontery to accusing our very own Nollywood Star wrongly, some Americans celebrity apparently are more dumb that I thought. And you call yourself a black woman? yet, you are accusing another black woman like you wrongly... Whatever happened to black women supporting each other? Now I see why all your Ex left you stranded, because you lie a lot. shame on you. This fantastic Nollywood actress is a dear friend and colleague, please lets support our own. I know some imbeciles will not agree with me on this, but who cares? "Na you na get u na dirty mouth" 💒