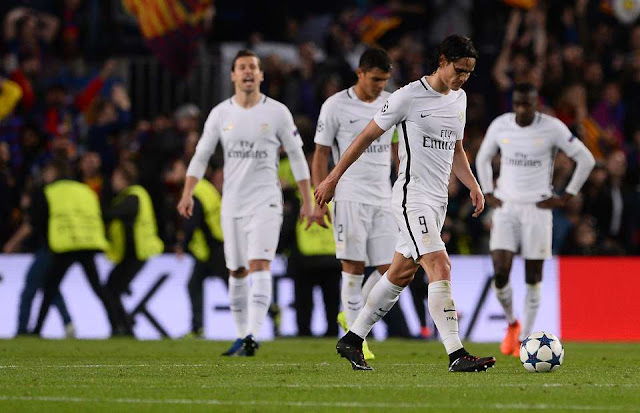 
Prior to Wednesday's game, no Champions League team had ever overturned a first leg deficit of more than three goals. But Barcelona broke that record against the Ligue 1 champions, scoring three times in the final seven minutes to complete a sensational comeback.

PSG's 4-0 lead should have given them confidence heading to Spain, but it has now emerged that not even that advantage was enough for them to banish their fears prior to the match.

In a video shot before the second leg, Verratti, Matuidi, Meunier and Draxler were filmed discussing their previous experiences of blowing first leg leads against big sides.

"The first 20 minutes is going to be tough," said Matuidi. "The pitch is huge. When Neymar has the ball, you're always one-on-one."

He added: "I think the coach and the team were afraid because we didn't attack."

Recalling PSG's collapse against Chelsea, Matuidi added: "It was the same with us against Chelsea. We won 3-1 at home. You think 'it's all good, we are qualified'. When we landed there I think we were afraid, we didn't attack. [We lost] 2-0. Eliminated."

In the end, Wednesday's result eclipsed all previous European collapses, and PSG's players were treated to a volley of abuse when they landed back in the French capital.

A statement from the club read: "On Wednesday night, upon their return from Barcelona, the Paris Saint-Germain players were confronted and threatened by several individuals at Bourget Airport, despite the club and authorities reinforcing security.

"These individuals verbally insulted the players before vandalising their cars. Several vehicles were damaged.

"In this extremely hostile and aggressive climate, all vehicles were escorted to ensure the safe passage of the players, their families and club staff members. One individual was struck by a car trying to escape the crowd that was physically threatening the players and their families.

"A police investigation is under way to establish exactly what happened.

"The club, and all those present, have informed the investigators of their readiness to help the investigation, to get to the bottom of this regrettable incident.

"The club strongly condemns the actions and behaviour of the individuals in question."