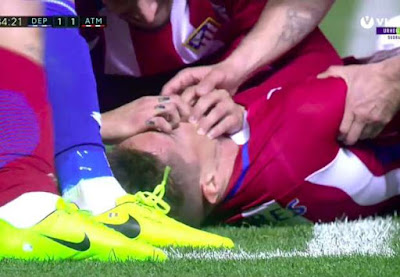 Atletico Madrid striker Fernando Torres is in stable condition after he was taken to hospital after suffering a head injury in Thursday’s 1-1 LaLiga draw with Deportivo La Coruña.


Former Chelsea star Torres had a collision with  Deportivo player Alex Bergantiños as they both went to head the ball in the 85th minute of the game at the Riazor.
Torres then crashed heavily to the turf, with his head hitting the ground hard.

With players from both sides appearing very concerned by what they had seen, medical staff rushed over and Torres, who at least initially seemed to be unconscious, was subsequently taken off the pitch on a stretcher.

Atlético afterwards gave an update on Twitter, assuring worried fans that the player was not in critical condition.

“Thanks for the messages of support for @Torres. He’s stable and conscious. He’ll spend the night in hospital and undergo more tests tomorrow,” the club wrote.

Atletico had fallen behind in the 13th minute when Florin Andone scored, before Antoine Griezmann equalised with a spectacular 68th-minute goal.

Torres’ former clubs Liverpool and Chelsea also tweeted messages of support to the Spain striker, who will be 33 this month.