Why I gave Victor Moses a chance at Chelsea – Conte 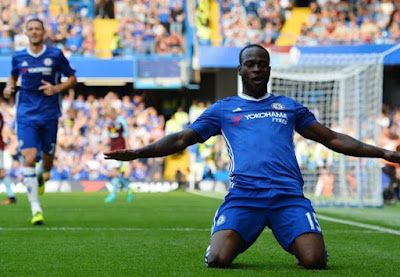 Chelsea manager, Antonio Conte, has opened up for the first time, about why he kept Victor Moses from going out on another loan deal and giving him a chance to prove his worth.


The Super Eagles star spent the previous three seasons on loan at Liverpool, Stoke City and West Ham after signing for the Blues.

But Conte says he immediately noticed his ability, after watching him play during their pre-season tour of Austria and the United States of America.

“I realised it quickly, that Victor could stay with us,” he said at a press conference at Cobham Training Centre.

“I remember during pre-season, when we stayed in America, I spoke with him and told him: ‘Victor, you will stay with us.'”

“I’m happy to have this type of player. But I saw his potential quickly. I knew of him, but to see him live is very important to judge a player. I repeat: he deserved to stay with us this season, and also now he’s deserving to play in the lineup.”

The former Juventus boss, also praised Moses’ ability to adapt to his new wing-back role, which requires a lot of defensive work.

“For Victor, he was very, very happy when he listened to my words,” Conte added.

“To tell me: ‘I’m ready to stay here and fight for you, for the club. I need to have my chance and show I deserve to play with this team, with Chelsea.’

“It happened, this, and we are very happy about this. He’s shown himself to be a great player. If you ask me if I imagined him in this new position, not before. No. Not before [we tried him out in the role].

“We started 4-2-4 and I always saw him as a winger, very good in one versus one, but a bit poor defensively. Then, when I decided to change the system, I wanted to try him in this new role and to work with him on defensive situations.

“He showed me great commitment to understand, to study the new role, above all in defensive situations. Now we have a complete player, offensively and defensively.

“I saw in the past that Victor had injuries in the season. Different times. When that happens, and a player is injured, it’s not easy to have a correct evaluation of the player.

“But this season, I think we are good and also we have been lucky to prepare him in a good way. He’s always available, up to now.”
at 1:04 PM