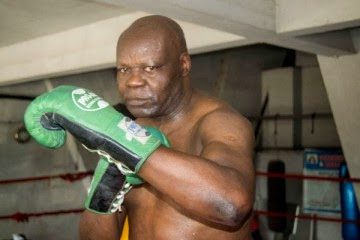 
Ali said other previous winners of the IBU world title whose names were also entered into the Guinness Book of records as the oldest fighters of their respective times, did so in their home countries. Hence, his bid to join their ranks cannot be any different.

In a copy of the letter to the Acting-President which was made available to the media, Ali narrated his ordeal in the hands of various sports administrators in his bid to realize his ambition, adding that the organisers of the fight had now given him a deadline to furnish them with the process to the fight.

He wrote: “Sir, the International Boxing Union (IBU) has given Nigeria a March 10, 2017 deadline to give them a letter guaranteeing the safety of the 170 member countries that would be in Nigeria to watch the historic fight and to pay the overdue $1M IBU approval fee or lose the right to host to Germany. I am offered big time money to fight in Germany but I prefer my country, Nigeria.

Ali has for over 10 years been struggling to enter his name in the Guinness Book of World Records as the oldest boxer to win a world title.
at 12:28 PM