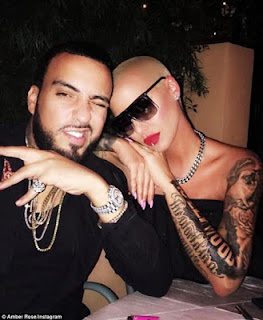 Amber Rose and French Montana were spotted partying together in Los Angeles on Saturday and  Amber uploaded a snapshot of them together.


Soon after her photo went up, her followers began to wonder if this meant they were both in a romantic relationship.

Some followers commented that Amber and French make a great couple while some pointed out that she was dating Khloe's ex-boyfriend, who she publicly fell out with sometime in the past.

Amber and French have always maintained that they are close friends and nothing more and TMZ reported in 2014 that Amber was dating French's brother, Zack though she kept it under wraps because at the time she was in the midst of a custody battle with her ex.

Amber and French spoke about the rumours. She recalled:

"The next day it was just all over the Internet that we’re boyfriend-girlfriend. It’s like, you can’t even hang with somebody, like, in Hollywood and it’s like all of a sudden are f***ing.'"
In reply, French said to Amber: "You’re like my psychiatrist – I always come to you when I have problems."

She added: "We literally – can I say that we’ve cried together before?"

French Montana responded with a laugh: "She cried, I can’t cry."

Now the pair have sparked romance rumours again and if the photos Amber shared are anything to go by, it seems they might be taking their friendship a step further.
at 4:25 PM