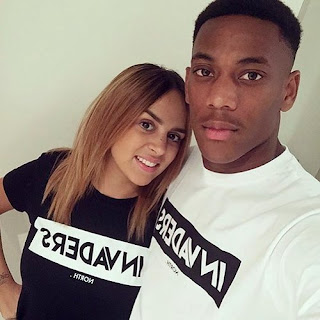 Manchester United forward Anthony Martial didn’t have a good weekend as he was left out of the squad to face Chelsea at Old Trafford on Sunday evening.


The Frenchman hasn’t always been in Jose Mourinho’s good books since he took charge last summer, as the Portuguese tactician has previously challenged him to step up and deliver.

United’s woes in front of goal for the most part this season can be attributed to the likes of Martial and Marcus Rashford, and perhaps there was something in the most recent snub to suggest that he could be under real pressure to prove himself moving forward.

If that wasn’t bad enough, former flame Samantha Helena has had a pop at him too, leaving a Snapchat post open for interpretation as to whether she was merely just giving him some grief or hinting at problems between the 21-year-old and Mourinho.

The post can be seen below, which effectively translates as: “You say you’re not playing because of me. Am I Mourinho?”

It seems the pair haven’t made up since their well publicised break up, and with Martial contributing just seven goals and six assists in 32 appearances for United this season after making a stunning initial impact following his move from Monaco last year, it looks as though he’s got a lot to ponder this summer
at 1:26 PM