#Based On Logistics: Efe responds to allegations that he unfollowed his fans on instagram

Yesterday, social media was on fire as the winner of just concluded Big Brother Naija show, Efe, was accused of unfollowing all his fans and supporters leaving four celebrities and one sponsor of the entertainment show he won a few days ago.

Efe had allegedly unfollowed all his fans and supporters leaving only four celebrities; @funkejenifaakindele, @baddosneh, @official2baba, @annieidibia1, and sponsor of the entertainment show, @payporte he won a few days ago. 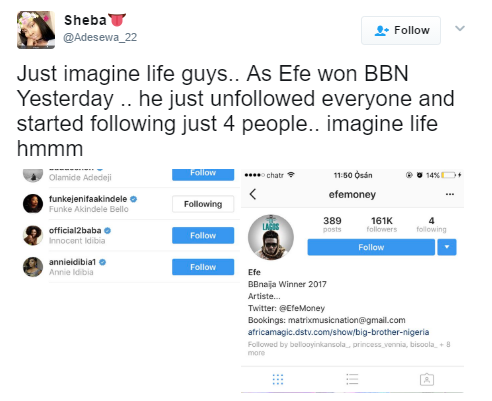 Well the 24 year old new millionaire has responded to the allegations, saying he did no such thing.  He was live on pulse TV, where he revealed, he has not even laid hands on his phone since he got out of the house and he also told Wazobia max, that he would follow back as soon as possible.

Watch the video below:

Efe's response when asked If he unfollowed his friends on his Instagram account...Said it was Photoshoped #WazobiaMax #Bbnaija2017 #Bbnaija #TeamEfe #Efe
A post shared by WazobiaMax TV (@wazobiamax) on Apr 13, 2017 at 3:40am PDT