#BBNaija: Bisola And Debie-Rise physically fight after their heated quarrel 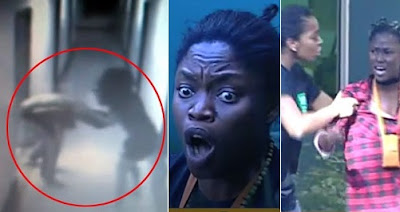 Last night, Big Brother Naija housemates Bisola and Debie-Rise took on each other in a physical duel.


You will recall that they had a war of words yesterday over the arrangements of a game they were told by Big Brother to organise.

Debbie Rise had made a last minute change and Bisola began to argue with her, insisting that it doesn't make any sense (even though the other housemates did not mind).

When Debbie tried to explain that there was no noticeable change in the game and said Bisola should keep shut, Bisola fired back, saying: "Don't tell me to keep shut. I will talk and say anything that I want to. Close your fucking ears, be deaf. You cannot tell me to stop. Why are you telling me to keep shut?"

Hours after the verbal fight, turns out the ladies had a big good physical fight.
at 2:05 PM