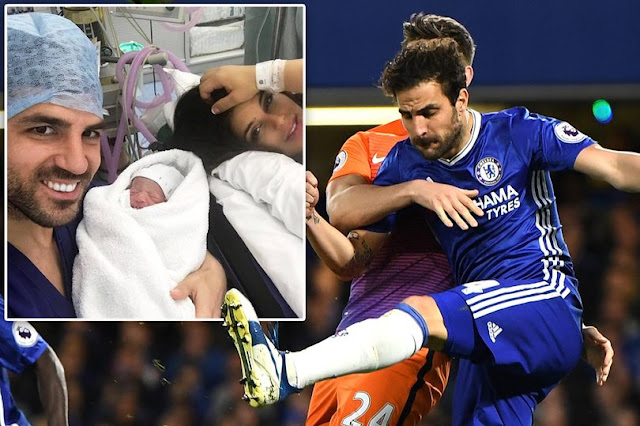 Cesc Fabregas has become a father for a third time after wife Danielle Semaan gave birth to a baby boy.


Leonardo Fabregas Semaan was delivered in hospital on Tuesday night.

Fabregas wrote on Twitter: "Tuesday night we welcomed our gorgeous boy, Leonardo Fàbregas Semaan to the world. Thank You @firstLadyD4 my love, for everything."

The pair already have two daughters together, Lia, three, and Capri, one.

Fabregas was back in action for Chelsea just 24 hours after Leonardo's birth as he came off the bench to help the Blues over the line against title rivals Manchester City.

Two first-half goals from Eden Hazard proved to be the difference as Chelsea maintained their seven-point lead over Spurs at the top of the table with a 2-1 win.

"It was a massive game and thankfully we won," Fabregas told Chelsea TV . "The result (against Crystal Palace) on Saturday put a lot of pressure on us. We know we still have a good advantage, but this is the Premier League and you don't want to be giving points away, especially at home.

"We have character. We can bounce back at anything that comes in front of us. It wasn't the most pretty game from us, but it was a very consistent performance.

"We knew what we were doing, we had a game plan and I think it worked perfectly."
at 5:44 PM